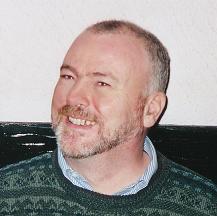 Stuart Booth is a powerful singer of traditional style songs and a forceful player of the Bodhran. His music has a strong Irish influence but it varies from old English ballads through to songs associated with the emerging tradition of the new South Africa. 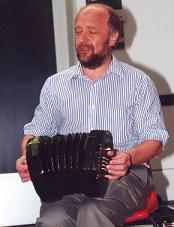 Pete Burnham sings both acappella and accompanies himself on octave mandola, guitar or concertina. He regularly teams up with other singers, usually contributing a strong harmony to the proceedings. One such collaboration with Sheila Mosley has borne fruit in the form of a CD called A Conflict of Harmonies. Pete inititiated the Leicester Folk Diary. He also teamed up with Bill Wilkes to form Wilbur Promotions. Pete, Bill Wilkes, Karen Harris and Miggy Cambell sang together under the name GU4. Still with strong connections, he attends the club less frequently since emigrating to Northumberland where he runs the Northumberland Folk Diary. 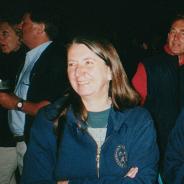 Lyn Cooper is a singer, songwriter and good all round musician who is well known on the local folk scene. She is equally at home performing her own well crafted numbers, singing unaccompanied traditional songs or providing the harmonies for other singers. She is a sensitive guitarist, a fine English Concertina player, and isn't half bad when performing on the whistle. She is the leader of the Navigation Band and sometimes performs as part of an informal duet with Martin Tabraham. And if that wasn't enough she also dances with Anstey Royale Chalfont North-West Morris team. 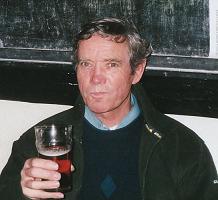 Bob Crosby is a fine singer of traditional song, usually performing them unaccompanied. He is predominantly known as a shantyman but he also turns in the occasional ballad and the odd humorous song. Bob is a stalwart of the Everard's Anstey Old Original Cotswold Morris side. 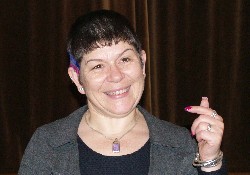 After early days in 'the Brickies' Karen Harris was off the scene for a while, but has come back with a vengeance. A sensitive solo singer, she also sang with Bill Wilkes, Pete Burnham and Miggy Campbell in GU4. She now sings with Bill Wilkes as ‘Shades of Grey’. 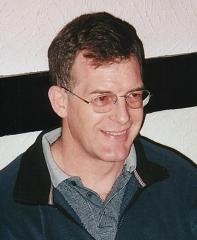 Tony Jalland is a much admired singer who usually accompanies himself on the guitar. He learnt his craft with a folk band in the seventies but now performs as a solo act. His sensitive style and melodious delivery have made him a firm favourite at both the Seagrave Folk Workshop and the Swan in the Rushes Folk club.

Jacky Lockley is a born performer and singer of unaccompanied songs. Her roots are firmly anchored in the tradition but she is also an excellent exponent of music hall numbers. She has a strong interest in ancient customs, folklore and ritual dance and is a member of Anstey Royale Chalfont North West Morris team. Jacky is also part of the acappella harmony group Young No More along with Nic Burdett and Vic Simpson. 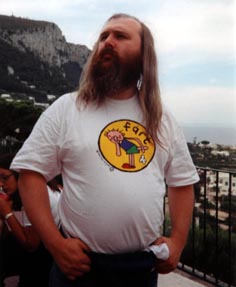 Phil Preen is an enthusiastic supporter of all things traditional. His portfolio of songs varies from the traditional to the humorous. He plays the whistle, anglo concertina, bodhran and spoons. Phil received a xylophone for his 40th birthday but we've not seen him play it out yet. He is a member of the Bang On The Wall Ceilidh Band and dances with Everards Original Anstey Morris Men and Sergeant Musgraves Dance.

Martin Tabraham is a wonderfully lyrical singer, accomplished guitarist and imaginative player of various whistles. He also plays English Concertina, can squeeze a decent tune out of the Scottish lowland bagpipes and can often be heard harmonising on the choruses when other singers perform. His material ranges from the English and Celtic tradition through French dance tunes and Richard Thompson numbers to the blues. Martin is a well established performer who often appears solo around the local folk clubs, he is a member of the trio Wheezle, he plays with the Navigation Band and sometimes teams up with Lyn Cooper for the occasionally number. 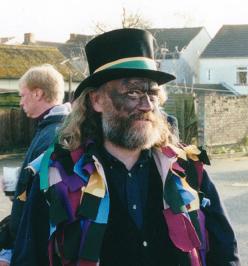 Steve Tunnicliff is a man steeped in local tradition. He is an eloquent singer who is equally at home with pithy ballads and bawdy music hall numbers. He plays melodeon and fiddle for both New St. George and Rutland Morris teams as well as dancing with both sides. Every year around Plough Monday, the bearded figure of Steve can be found in local pubs clad in a flowery dress and hob-nail boots as he plays the outrageously funny "Dame" in the Long Clawson mummers play; a small part of our past that Steve has been instrumental in researching and reviving. 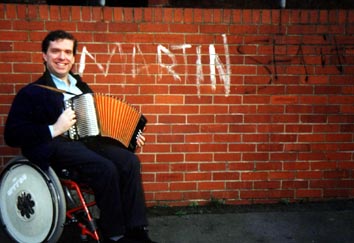 Martin Wildig is a great melodeon player and consummate fiddler. He leads the The Bang On The Wall Ceilidh Band, is a member of the highly acclaimed Mortimers Morris Band and was until recently the "musical director" of Anstey Royale Chalfont's North-West Morris Band. Martin now also plays for the band of Segeant Musgraves Dance. Martin's repertoire extends from English dance tunes through the celtic tradition to French dance music. His uncompromising, lively, driving style has made him the toast of many a pub session. 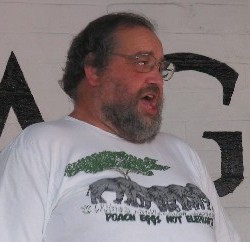 Bill Wilkes is a thick skinned Brummie who can always be relied upon to sing (whether you want him to or not!). Once he starts singing, it is a rare audience, in or out of folk clubs, whose attention is not immediately grabbed by his wonderfully deep, rich, powerful voice. His sensitive interpretation and delivery has earned him the respect of many other singers and he is in his element when leading the assembled congregation in a chorus. He is also a born organiser, without whose drive and enthusiasm the Grand Union project would have remained a bright idea at the bottom of a pint pot. Bill has also teamed up with Pete Burnham to form Wilbur Promotions presenting a number of concerts at the Y Theatre in Leicester. Bill, Pete Burnham, Karen Harris and Miggy Cambell sang together under the name GU4. He now sings with Karen Harris as ‘Shades of Grey’.